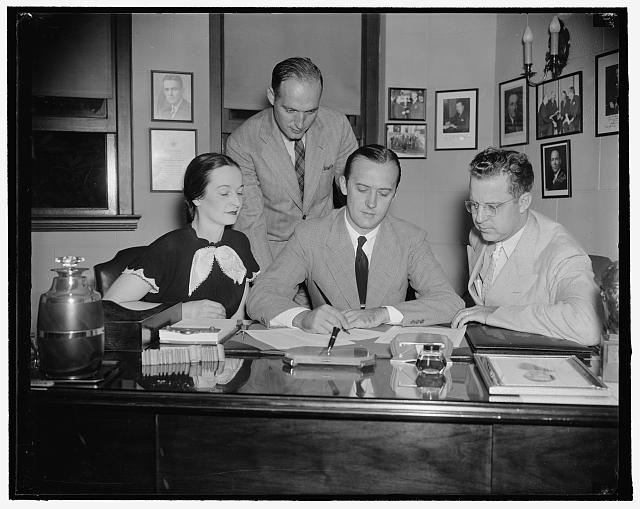 1937 YDA National Officers (8/24/37)
Left to Right: Mrs. Ocie Heady (OK), Vice President; Pitt Tyson Maner (AL),
President; and Paul Williams (MO), Secretary. Standing is Judge John Bailey (CT), Treasurer,
The Young Democrats of America has been the official youth arm of the Democratic Party since its founding in 1932.  Since 2002, the Young Democrats of America has operated independently of the Democratic National Committee as a nonfederal 527 political organization.

The Young Democrats of America left the DNC structure in order to grow the long-term sustainability of the organization and to have control over our own budget and programing.  In accordance with the DNC charter and bylaws, the Young Democrats of America maintains three voting seats on the DNC, including a voting member position on the DNC Executive Committee for our president.

On March 4 – 5, 1932, the first national organizational meeting was held in Washington D.C., with delegates from 27 states and the District of Columbia present.  One of the first articles of agreement stipulated there should be no distinction in membership and privileges between men and women.

Today YDA is an active, thriving organization comprised of state chapters in nearly every state and thousands of local chapters across the country.